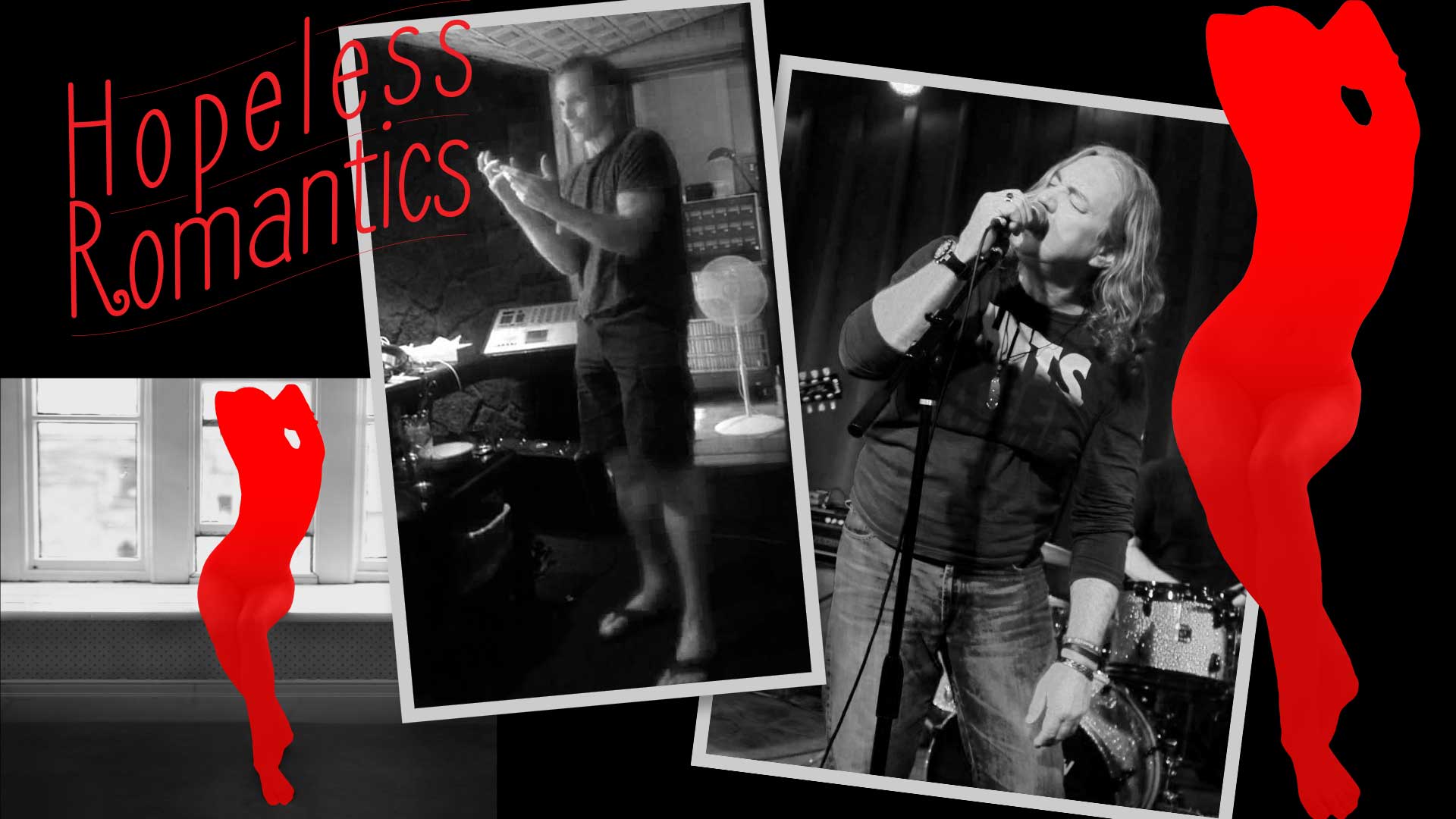 Tom Hockridge and Jeff Shea of the Hopeless Romantics wrote 162 songs between 1976 and 1979. Along with guitarist Fred Nelson, they performed in Canada and the Caribbean but broke up in 1979. They never realized their dream of recording 12 albums. In fact, they never even recorded one. They did not “make it.” They were penniless…. Wing it forward to 2012. Jeff was listening to the old cassette recordings that they had copyrighted. Jeff placed a call from Inle Lake in Myanmar to Tom in Burlingame, California, USA. Saying that he was inspired by the lyrics (mostly which Tom wrote) and the guitar chords (which Jeff wrote), he suggested they get together and record. After all those years, Tom was still recording and writing lyrics. Jeff’s business had acquired Studio D in Sausalito, California. Teaming up with expert engineer, musician, songwriter and producer, Jason Victorine, they started to record their long-standing compositions in a world-class room. Here is the music, uncovered after decades, of The Hopeless Romantics, finally presented to the world.  And a little bit of history….

The Hopeless Romantics is a band that two friends started in 1975. Yes, 1975.  Tom Hockridge and Jeff Shea were competing against each other in football. Tom was quarterback at Burlingame High School and Jeff was defensive back at Mills in Millbrae, both just south of San Francisco. They started singing together in 1975. That year, Jeff went to Europe, hitchhiking across the country. In Canada one evening, he got a ride from a motorcyclist. Peering around the driver’s head, mosquitoes flying in his eyes, Jeff yelled out, “I can’t see!” The driver said, “I can’t either!” That was Paddy Mallon. Paddy was a drummer. Jeff said, “I’ll be back with my band and you will be our drummer.”

“Well, here we are in Canada. I want to include in today’s entry a quote for posterity from a notebook I wrote in Italy in 1975. “When I get to Thunder Bay I’ll have him join my group. But that’s it right there – Jeff Shea, Tom Hockridge, Fred Nelson and Paddy Mallon! The four boys who hopefully will make it big. I don’t have to guess, I can already hear us playing in my head.” It’s rather unbelievable to me that I should have been able to single handedly bring about such a thing. Here we are, the H.R.’s.

We practiced Buried Treasure, Energy, The World We Both Knew, What Your Mother Told You, and Keep Me Warm and they are all ready for performance. Buried Treasure sounds so good I couldn’t believe it. Paddy didn’t come by today. I heard a few things about him like that he was irresponsible, got drunk before performances, was always late which I loved to hear because besides all the problems they all said he was a real good drummer. And it shows that he’s just crazy enough to join the group.”

We played in Thunder Bay until September 1, 1977:  “Thursday brought a very unexpected turn of events. The 4 H.R.’s went to the Murillo to set-up and to practice where 2 immigration officers walked in and asked us for our working visas. They took down information about us and we told them that although we had worked there, that we had left all the money to Paddy so he could afford to come to the states. They prohibited us from working any further. ”

Fred, Tom and Jeff left Canada. Paddy stayed home. They reformed in Miami with a new drummer, Don Rainey and performed for five weeks on Mardi Gras cruise lines, traveling between Puerto Rico, the Bahamas and the U.S. Virgin Islands. They traveled to New Orleans and set up shop there, but eventually, the band broke up and went their own ways.